Aside from the onslaught of misinformation fueled by fake accounts on Facebook, there are many more ways in which these phony profiles affect other users, including those who use Facebook for marketing purposes. And even if all of your activity on the social site is 100% authentic and well-intentioned, it’s still possible to end up dragged down by faux Facebookers.

When you’re investing time, effort, and money into Facebook marketing strategies, you don’t want anything to stand between you and your maximum potential ROI. Unfortunately, fake profiles on Facebook can harm your efforts.

Here are a few ways that fake Facebook accounts can slow you down in the pursuit of your goals:

Even though Facebook works to pinpoint and eliminate illegitimate profiles, the issue has long outpaced its internal efforts. According to McAfee, based on estimates stemming from the last-reported number of fake Facebook users, there could be upwards of 160 million-plus fraudulent accounts.

This vast number of fraudulent accounts means that anyone that uses Facebook for business (or even personal purposes) should expect to do their due diligence to separate the real from the fake online.

How to Tell if a Facebook Profile is Fake

Usually, fake accounts on Facebook fall into one of two categories:

You can often spot a Facebook bot account a mile away because they frequently employ obvious tactics like copy-and-pasted spam comments. Fake accounts created and managed by individuals can be trickier, but certain indications can still clue you in.

Here’s what to look for to determine if a Facebook profile is real or fake – if an account has more than a couple of these red flags, it’s best to proceed with caution.

One of the most common ways that bots and fake accounts entice unknowing users is by using an extremely attractive image as the “face” of the profile.

Countless scientific studies break down the human habit of assuming that beauty and integrity go hand in hand. Researchers have consistently found that humans tend to trust people they perceive as aesthetically attractive more easily. So, don’t blame yourself for doing a double-take – just make sure you avoid making this all-too-common error.

It’s not unusual for fakers to repurpose photos of a celebrity or simply steal images from other unsuspecting Facebook users. You can use Google Image Search to see if photos have an original source other than the profile you’re viewing.

Only one (or a couple) photos

A bot account will have just a single photo on its profile in many cases. The entire purpose of a bot is to use minimal effort to wreak maximum havoc, so they aren’t going to be fleshing out a well-rounded profile page. Instead, there might be just one or two photos to create the illusion of a real person.

Bio information that seems strange or too good to be true

Does the profile have a biography section that reads like something from a movie? Maybe the user boasts a long list of supposed accolades and accomplishments, or perhaps something just doesn’t seem quite right. Whatever the case, strange bio info can signify an illegitimate account.

When you click on an authentic Facebook profile, you can expect to see a wide range of activity. Real users will share updates, post photos, interact with friends, and generally have an active presence. But if a Facebook profile has an entirely blank activity feed, it’s time to be suspicious.

On the other end of the spectrum, excessive activity is also a cause for concern. Bots are often programmed to complete a certain number of “likes” or comments per day, far more than an actual human would. So, an activity feed that shows dozens and dozens of repeated actions each day is probably fake.

Also, take a quick look at how many friends a Facebook user has. Fake pages tend to have either thousands and thousands of friends (way more than a person would actually have) or just a handful of equally bogus friend accounts.

A go-to Facebook fake account checker method requires just a few seconds and a couple of clicks. Even though bots are programmed to accept friend requests automatically, they usually can’t respond appropriately to messages or other attempts at engagement. So, send a quick message and see what (if anything) you get back.

There are many reasons people create and use fake accounts on Facebook, with motivating factors ranging from fairly innocent to completely criminal.

An individual might use an inauthentic Facebook profile for personal gain in some cases. They could choose to interact with others under the guise of their faux identity without aiming to engage in any illegal activity. However, if you’re using Facebook for advertising and your brand, it’s pretty unlikely that you’ll have many experiences with these types of accounts.

Cybercriminals are among the most nefarious Facebook fakers to gain access to users’ personal information, which they either sell or use to commit identity theft crimes. These people steal private data to open illegal credit cards, make purchases, and secure loans.

However, there are also many fake accounts created for the sole purpose of generating money. Buying and selling Facebook followers has grown into a multimillion-dollar business that doesn’t seem to be going anywhere anytime soon. Both individuals (specifically, online influencers or celebrities) and companies are willing to shell out serious cash to exaggerate their likes, follower count, and engagement. And since it’s pretty easy and affordable to buy the software to create fake profiles, it’s something that tempts many people with the promise of profits.

What to Do if You Find a Fake Facebook Page

If you suspect that a fake page has approached you, you can quickly report it to Facebook for review. From there, it’s in the hands of the Facebook team – and you’ll know to stay far away from the profile.

Sometimes, your best bet is to call in a professional when navigating the increasingly complex world of Facebook, especially when your marketing goals, budget, and brand reputation are at stake.

V Digital Services can help you develop and implement a successful social media strategy while safeguarding your brand from fakes and phonies. For more information about using Facebook to elevate your marketing, contact our team today! 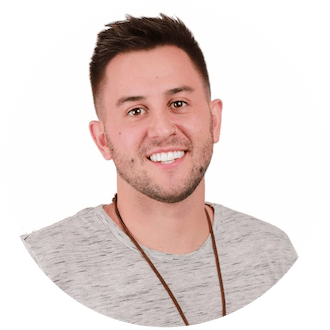 With 10 years of social media and marketing experience, Brandon Rhea has a pulse on industry trends and brings hands-on experience to the Social Team at V Digital Services.

Brandon began his education in marketing at Northern Arizona University where he received two bachelor’s degrees in advertising and public relations. During his time at NAU, he was hired as the first Marketing Department for NAU Campus Recreation Services. In his role, he created advertisements for future events, programs, promotions, classes, and news related to NAU campus recreation. Notably, he planned and executed NAU Pink Week – a community event that raised a total of $5,645 for Breast Cancer research.

Brandon joined the VDS Team in April of 2021 as a Social Media Specialist and through hard work and dedication, he moved up to the Social Media Manager role. During his time at VDS, he has helped clients hit their goals of growing their followings, building brand recognition, driving engagement, increasing website traffic, and ultimately boosting sales. Brandon brings his expansive industry knowledge to the team and is eager to share it with his team and his clients.

Just For Fun
When Brandon is not working on social content, he enjoys mountain biking, kayaking local lakes and rivers, snapping stunning shots with his drone, and playing his Nintendo Switch online with friends.

How To Respond To Negative Reviews

How to Use Robots.txt to Allow or Disallow Everything

What is a Good Click-Through Rate?

What to Know about Attribution Models

Should You Pay for Google Reviews? Risk vs Reward